McLaren took an important step in its Formula 1 recovery last season, but it knows it is going to have a fight on its hands to repeat its best-of-the-rest tag this year.

The team is pushing hard to deliver just that, though, as Giorgio Piola and Matt Somerfield explore with their look at what steps the Woking-based team has made.

McLaren tested a revised front wing arrangement with its DNA rooted in the concept used last season. However, it features several key differences.

The most important change is to the footplate design, as not only is the main profile flattened out significantly (blue arrow), there’s now a lipped section on the outer edge (red arrow). Last year’s design is shown in the inset circle as a comparison.

To get the best out of these alterations, further optimizations have been carried out to the shape of the mainplane, as it now features a shallower curvature in the outboard section (black arrow), whilst the upper flap is now one continuous surface, rather than being separated into two, as it was before (green arrow).

This means that any change of flap angle will have a bearing on the entire surface, rather than just the inboard section. 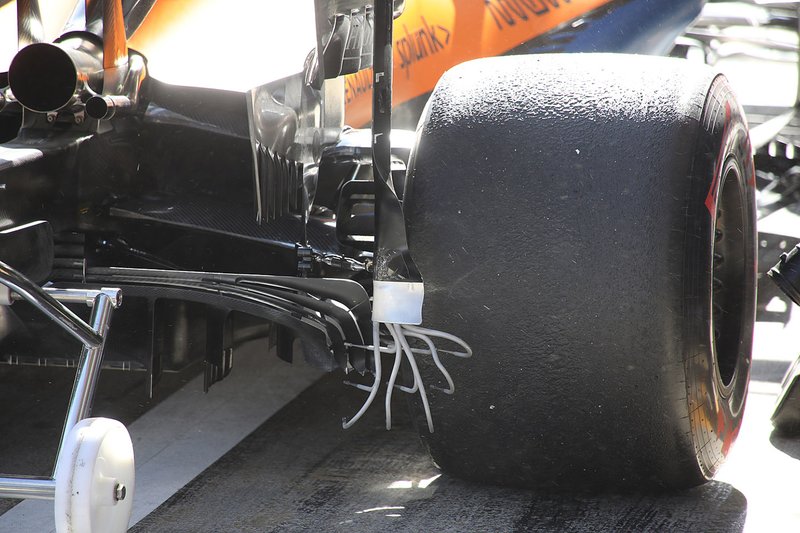 Changes were also clear at the rear of the car during the second test, as the team fitted the MCL35 with a new floor and diffuser.

The most apparent change to the rear of the diffuser comes at the outboard section of the assembly, as the team now favors a more steeply sloped ceiling and more curved Gurney-like extractor strips to accentuate it.

More importantly, these changes take advantage of the larger internal dimensions of the diffuser itself, as the team has increased the height of the floor transition.

The front brake drum has been optimized for 2020, as the team continues to take airflow taken in by the main inlet, force it across the face of the brake drum and push it out through the wheel rim. The section of the drum cut out for this purpose is now divided into two sections, rather than the single section used in 2019, further enhancing flow distribution.

Flo-viz paint was applied to the front brake duct during testing to evaluate whether the parts matched the results seen during work in CFD and in the wind tunnel.

McLaren has paid particular attention to the design of the MCL35’s chassis, with the bulkhead supplemented by a chin section that improves flow underneath the car and caters for the nosecone shape ahead of it.